MARIANSKE LAZNE is a world-known spa town, the second biggest in the Czech Republic. The town has 40 mineral springs; the best-known is Rudolf's spring. The town is situated in a wooded valley at an average altitude of 630m and it overflows with natural healing sources.

40 mineral water springs rise within a relatively small area and more than one hundred of them in the vicinity of the town. The first was discovered in 16th century. The local climate is fresh sub-mountainous the strength of which originates from the number of parks and forests. A genuine treasure and the dominant feature of the town’s chiefly neoclassical buildings is the magnificent Spa colonnade dating from 1889. A visit to ”the Singing Fountain”, where interesting music programs coupled with light shows are staged, is likely to provide an unusual experience. Near the town one of the most beautiful 18-hole golf courses in Central Europe can be found. The course was founded by Edward VII, the King of England. 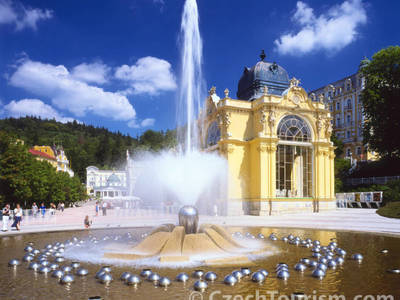