The first written record of Cesky Krumlov dates back to 1213 when Austrian and Styrian duke Otakar mentioned it at a residence of the Vitkovci family. In 1302 Krumlov became a property of Rozmberks and under Jindrich and Pert of Rozmberk it was granted the town status. The latter helped the town to acquire various privileges, construct several churches, monasteries and other buildings, while trades, business, cultural activities and general standards of education thrived.

This period is viewed as the most prosperous one in the history of Cesky Krumlov. However, the prodigal life of the last Rozmberk, Petr Vok, made him to sell the domination to Emperor Rudolf II who passed it in 1622 to the Eggenbergs, later replaced by Schwarzenbergs. But the glorious days of Cesky Krumlov were gone and it gradually became rather a provincial town. Following the Munich Treaty it suffered from German occupation and after the Second World War Cesky Krumlov became a nearly forgotten town in the boarder zone, doomed to isolation. The historical buildings in the center suffered enormously from neglect. Although proclaimed a national heritage reservation in 1963, Cesky Krumlov could not escape its fate of disinterest in the reconstruction and development along the country’s boarder with the west.

Fortunately, the situation has changed with the new regime, and particularly since 1992, whet Cesky Krumlov was included into the UNESCO list of cultural and natural heritage. The unique complex of tree hundred historical houses and buildings and the country’s second largest (after Prague) castle complex attract to the town million visitors a year. They are able to witness rebirth of the “pearl of the Renaissance era”, a nick name given to the town by history experts. 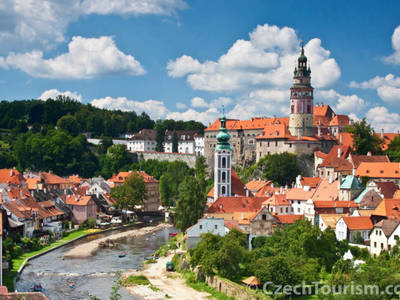