South Bohemian Folk architecture which can be admired in many villages in this charming fishpond country is probably best represented by the surviving brick houses, the finest examples of which are to be found in the picturesque village of Holasovice, 15 km west of Ceske Budejovice. Holasovice is a typical South Bohemian village with large village common and an uninterrupted row of brick farmsteads.

Folk architecture which in this particular place had been influenced by the Baroque and Empire styles has been known as the South Bohemian folk Baroque.

The atmosphere of the period is evoked by the large farmsteads which usually have two richly decorated gables connected by a vaulted gate with a small door. The gables have an undulated outline and many different stucco ornaments. Most of the houses have an oblong ground plan with the shorter side facing the village common. Holasovice was founded approximately in the 13 century. The village common, lined by 22 houses of a similar pattern and dating from the first two thirds of the 19th century, is one of the best preserved examples of folk architecture. The fishpond in the middle of village common, like most of the fishponds across this rich fishpond country, had been used for fish farming. The village with a long-standing folklore tradition had been selected as the location for the film version of Bedrich Smetana’s opera The Bartered Bride. It is a living example of the skills and feeling for beauty which had prevailed throughout the difficult times that Bohemian villages had to go through in the past century. 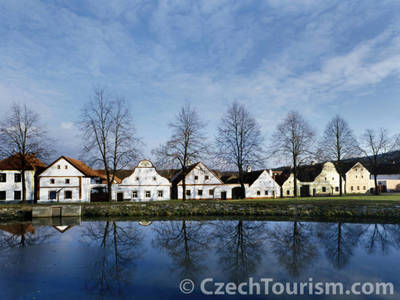