The St. John’s of Nepomuk Pilgrimage Church at Zelena hora hill at Zdar nad Sazavou evokes the admiration of visitors from all over the world by the originality of the Czech baroque Gothic with a masterful composition of the whole area. That is why Zelena hora hill has been included in the world’s cultural heritage of UNESCO list.

The abbot of the cloister in Zdar had the pilgrimage church in a forested region on the border between Moravia and Bohemia built in 1720 in honour of the Czech martyr and Saint Jan Nepomucky. It is a unique document of the mastery of the genius of the Prague builder Giovanni Blasio Santini, who chose for his work the symbolic five-tipped star. This was because, according to legend, a crown with five stars appeared above the body of the drowned martyr. A five-tipped star is characteristic of the composition in constructions featuring the so-called baroque-gothic style (the ground plan is in the form of a star, the church has five exits, on the main alter there are five stars and five angels). The main altar represents the martyr who was raised into heaven by angels. The side of the altar is sanctified by four evangelists. The figures are situated in a special vortex of flames, and it seems that they are deeply moved. The top of the cupola is decorated with a monumental tongue of the saint (the symbol of Jan Nepomucky) in a circle of fire. The work of Giovanni Blasio Santini conveys the originality of the idea and the brilliance of the technique in which both baroque and gothic elements are here combined in the splendor of the Czech baroque-gothic. 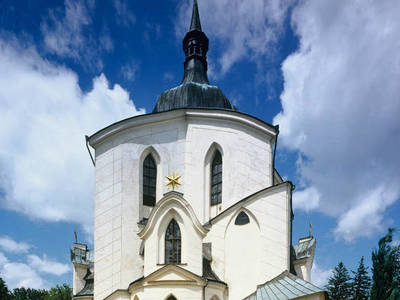