The early medieval market village of Kromeriz which had since the start of the 12th century been the property of the Olomouc based bishops was elevated to the rank of town around the year 1260. The bishops set up their summer residence and the administration property belonging to the Olomouc diocese there. Added to the stately residence later were three churches, a chapter, and a several schools.

On a site where a farmstead has stood before a Gothic castle was built which later evolved into Renaissance strong hold. In the second half of the 17th century, after the Thirty Years’ War, the educated and wealthy bishop Karl Lichtenstein of Castelkorn managed to raise the town from ruins and built and Early Baroque residence there where he placed a collection of works by leading European painters and established a large library full of rare books. A mint was built outside the chateau where special coins and medals were minted.

Flower garden in baroque style was founded outside the town walls, and was landscaped by both Italian and local masters. In the middle of the garden, criss-crossed by path leading past flowerbeds, natural mazes, alleys of decorative shrubs and trees, and past fountains, an octagonal rotunda was erected, richly decorated with paintings and sculptures. One part of the garden terminates with a colonnade lined with statues. The Podzamecka garden, which had existed here from Renaissance times, was it the course of centuries rebuilt in the Romantic and Classical styles, and garden structures, waterways and rare trees were added to it. The chateau, rebuilt in its current appearance after a fire in 1752, was in late 1848 and early 1849 the venue of a parliament sessions which approved the first democratic Constitution in central Europe. Thought not implemented at its time it was an inspiring example for future. The chateau, its historical interiors, the picture gallery, library, sala terrena, Assembly and Vassal halls, together with the two gardens comprise a unique whole whose inclusion on the UNESCO World Heritage List only confirms the significance of Kromeriz’s major landmarks as part of the world’s cultural heritage. 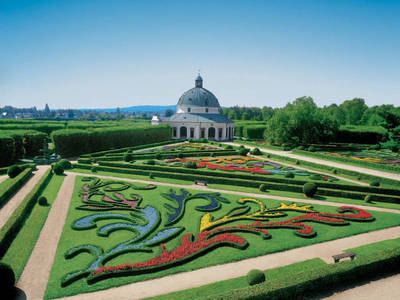