The old historical town of Kutna Hora was founded in the second half of the 13th century on an earlier mining settlement. In the Middle Ages the town was renowned for its silver mines whose wealth backed the power of Czech kings. Apart from wealth, silver mining brought to the town the status of the country’s second most important town after Prague.

In 1300 King Wenceslas II founded the mint Vlassky dvur which produced silver “Prague groschen” coins and granted to the town the right of mining – “Ius regale montanorum”. In the 15th century Kutna Hora even became a residential town of Czech kings.

The population increased and the town prospered. The church of St. James was built in the first half of the 14th century and construction works on St. Barbora’s Church started after 1380. In the late Gothic period numerous rich patricians in the town built their representative residences.

Subsequent pronounced changes in Kutna Hora occurred only in the Baroque period when numerous outstanding architects, contractor and artist worked in the town. Coinage in the local mint ended in 1727. The town badly suffered from attacks by Swedes in 1640s. Unfortunately, attempts at the turn of the 17th and 18th centuries to reopen the mines and revive the old mining glory failed.

In 1961 the historical center of Kutna hora was declared a national reservation and in 1995 it was included into the UNESCO cultural heritage list. The well-preserved historical character of the town is sure to offer a unique experience to its visitors. 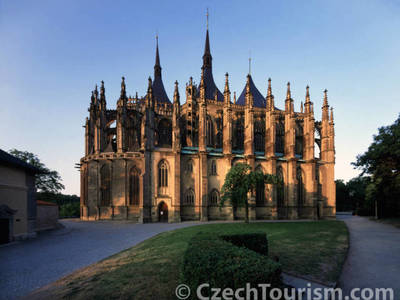