The Holy Trinity Column in Olomouc

Litomysl, the cultural and historical center on the Loucna River, was founded along the important commercial route connecting Bohemia and Moravia. The place was settled as early as at the turn of the 10th and 11th centuries and later granted town privileges in 1259. A bishop’s office was established in Litomysl in 1344, soon after the beginning of Prague archbishopric.

In the 14th century Litomysl experienced construction boom on the monastery hillock and below it during which appeared here numerous burgess houses. In 1520s this part of the town was destroyed by the Hussites and the bishop’s office ceased to exist. Later Litomysl became an important center of the Czech Brethren Church. Following the uprising of the Czech aristocracy the church was expelled from the town.

The Piarist order settled in Litomysl in 1641 and built here a school, college and church. The local castle from 1568 – 1584 is a Renaissance edifice, unique on the northern side of the Alps, with more than eight thousand graffito’s. Its small baroque theatre and amphitheater in the castle park offer concerts of varied genres. The castle complex includes a castle brewery, known as a birth place of famous Czech composer Bedrich Smetana. The town’s panorama dominated by spires of the Gothic church “Povyseni Sv. Krize” from the second half of the the 14th century and the Piarist church Nalezeni Sv.Krize (1714 – 1726). The square in Litomysl is one of the largest in country, with a town-hall of Gothic origin and with Renaissance and Baroque houses, many of them with arcades and vaulted ground-floor rooms. Among the most remarkable and oldest we should mention the house U Rytiru (Knights House) with a remarkable façade, now hosting a gallery. The center of Litomysl was declared a historical reservation in 1965. 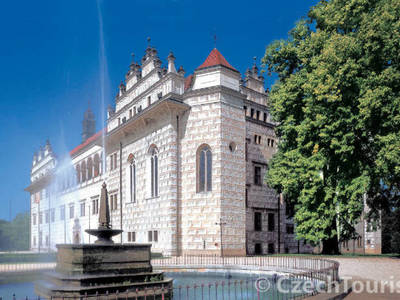