When in the middle of 13th century, the Liechtenstein family acquired their first land in Lednice, they suddenly owned as yet unused meadows and swamps, annually flooded by the Dyje river. By the time when, seven hundreds years later, the Liechtenstein’s were leaving the estate, the swamps had been reclaimed and singular complex of structures large and small had been erected between Lednice and the neighboring Valtice, like gems fitted in a huge mosaic of rivers canals and parks.

The Lednice Park which seamlessly merged with surrounding landscape has been nicking named “Garden of Europe” and “Garden of Paradise”. The Lednice-Valtice complex is a perfect example of a “cultural landscape”, or landscape which has been changed by humans into an original work of art. When possible, visitors are advised to take bikes with them because the Lednice-Valtice complex is so large that it can hardly be visited in one day, even on bike.

In 1666 – 1669, Karl Eusebius of Liechtenstein had an Early Baroque residence constructed in Lednice, having moved here from Valtice. He also had the Orangerie built and the park landscaped, with scores of Romantic structures added later and popping up into view here and there, among them the Hardtmuth minaret of 1792 – 1802, and the artificial ruins of John’s castle of 1807. The appeal of the complex is further enhanced by the Lednice fishponds which have become an ideal nesting place for water-fowl and have been included on the list of international ornithological reserves. The last major changes at the chateau were made in the 19th century, when the garden wing was rebuilt in the French Empire style and a tropical glasshouse was added at the eastern side of the chateau. The interiors were adapted in the neo-Gothic style. The Lednice Chateau is one of the finest examples of High Romanticism in this country. 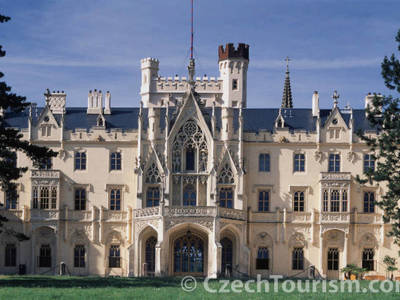