“Moravian Venice”, “pearl of uplands”, lake rose”, or poem in stone” – all these parables have been rightfully used for Telc, the town of irresistible beauty situated at the Czech Moravian frontier.

Telc appeared approximately in the middle of the 13th century at an intersection of two country’s routes. Although its founding date is unknown, the oldest historical monument in Telc, the late Romanesque tower Sv.Ducha, comes from the early 13th century. In 1339 the domination of Telc passed from the Royal family to the lords of Hradec who turned it into a medieval water stronghold, protected by ponds, moats, town walls and gates.

Telc acquired its Renaissance appearance thanks to Zacharias of Hradec, the most significant personality in the town’s history. During his reign the originally Gothic castle was rebuilt into a grand Renaissance residence with lavishly decorated interiors and beautiful arcades in the courtyard, all of which has been preserved up to now. Many Italian artists were invited then to Telc to remodel originally Gothic houses in the Renaissance style.

Baroque buildings appeared in Telc when it was held by the Slavata and Lichtenstein Kastelkorn families. In the 17th and 18th centuries the town hosted the Jesuitical order which also contributed to the look of Telc as we know it today while construction activities in the 19th century went on only outside the town’s center. In the 20th century Telc has been a growing and lively center of cultural and economic activities. Still, inside the center between the ponds and behind its gates, it has retained its grace from Zacharias’s times. For this reason the historical center of Telc has been included into the UNESCO list of world’s cultural heritage. 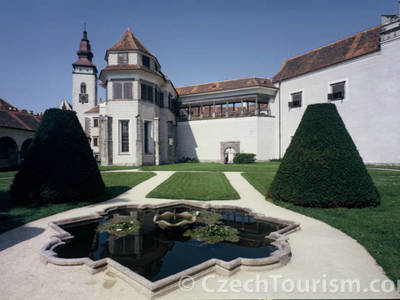