The ensemble of the Jewish Quarter, the old Jewish cemetery and the Basilica of St Procopius in Třebíč are reminders of the co-existence of Jewish and Christian cultures from the Middle Ages to the 20th century.

The Jewish Quarter bears an outstanding testimony to the different aspects of the life of this community. List on 3rd July 2003, is a unique document of Jewish culture in Moravia and the only Jewish monument outside Israel specifically placed on the UNESCO List. The area still exhibits its historical layout and structure that has developed in the limited area between the Jihlava River and the hill of Hradek. The Quarter exhibits a mysterious atmosphere with its tortuous streets, dark nooks, vaulted passages and other typical features. Unforgettable view of the romantic Jewish Quarter roofs can be enjoyed from Hradek Hill.Today, no original population is available in the former Jewish Quarter. Therefore, many buildings, such as the town hall, rabbi´s office, hospital, poorhouse or school, do not serve their original purpose any more.

St Procopius Basilica, built as part of the Benedictine monastery in the early 13th century, is an exceptional witness to the influence of Western-European architectural heritage in this region. The rich monastery was an important religious, cultural and economic centre and, last but not least, an important military stronghold. It could keep its position until the Hussite Wars. Its decline culminated in 1468 when it was stormed by the Hungarian Army. Then, the Church lost the property, which was later, starting from the 16th century, rebuilt into an aristocratic palace. It was possessed by the Valdstejn House from the early 17th century until its confiscation in 1945. 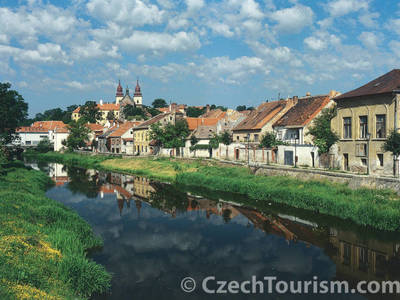