The Holy Trinity Column in Olomouc

The city of hundred spires built on the banks of the meandering river Vltava has for centuries been quickening the heartbeats of poets, painters, and photographers. It is a cult, administrative, cultural, business and industrial center of the Czech Republic, which has been the capital of the kingdom and the later republic, and the residence of the rulers and archbishops, for an uninterrupted period of thousand years.

The history of Prague in many way ways resembles the history of the Czech state. First a settlement around Prague castle and, later, Vysehrad Castle, it became a town with all its privileges in the 1230s, and developed into a self confident agglomeration of Prague towns; under Emperor Charles IV in the 14th century, it was one of the capitals of the Christian world, the seat of the first trans-Alpine university and huge building works, and 250 years later, during the region Rudolf II, a mysterious metropolis full of artists, scientist and learned rabbis. The Baroque entered Prague and the domes of its churches, the palace courtyards and gardens have since adorned the historic part of the town.

He who first referred to Prague as a symphony in stone has exactly captured its nature, a peculiar rhythmic beauty literally pervading the city, In some towns, art and beauty are haphazard additions, in Prague they are source vital to the city’s life. Prague has an unusual concentration of the theatres, concert and exhibition halls, museums and galleries; it is a city where the creation and reception of art have a long-standing tradition. Present-day Prague is also a city of trade fairs and a hub business. Known for centuries for its hospitality, Prague offers innumerable attractions and has as many faces as one can imagine from which visitors are certain to choose that which pleases them most. 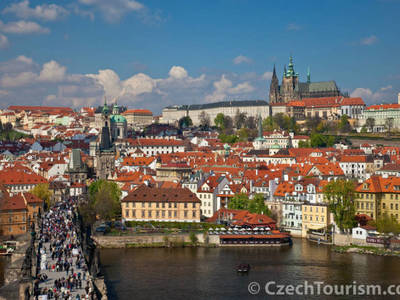